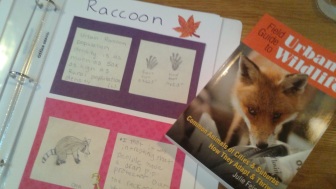 As we continue through the 6 methods of nature journaling. (By which I mean the 6 ways that I have tried out– you may have found other methods; and if so I’d love to hear about them!), this week lets explore “Species Accounts”.

A Species Account is a record of observations of one particular species. Scientists use species accounts to help them evaluate populations of species, migration patterns, success rates of conservation programs, and animal behavior (among other things).

One of our families favorite annual field trips is to visit Chatfield in the Spring and Barr Lake in the fall to watch an ornithologist who bands song birds. She uses a form of Species Account to keep records on the birds she bands each year. The Ornithologist puts a tiny band around the leg of a bird, and then she records the band number, the bird’s weight and various lengths, how much fat the bird has (did you know that song birds have skin that is so transparent it is possible to see the fat underneath?) and whether the bird is ready to breed.

Our “Species Accounts” notes look much different, of course. But, our notes are no less interesting, informative or important (at least in our opinion). Our notes primarily consist of notes about what the animal was doing at the time that we saw it.

Our most successful “Species Account” subjects have been the Raccoons that live in the open space near us and occasionally snack from the dumpsters. We have had the privilege of watching mama raccoon raise her babies going on three years in a row now.

In case you are curious, here are a few excerpts from our quickly scrawled notes:
7/20/2015 8pm:  Raccoon mom with 4 babies in and around the dumpster.  The mom sat w/ two of the babies waiting for the other two.  Eventually we realized that 2 babies were stuck in the dumpster.  We found an old rug, which we rolled up to make a ladder, and the babies crawled out.

10-6-15 2pm: we saw a Raccoon napping on the brick pile under the cottonwood by the highline canal.

1-27-16 2:30pm: We saw a raccoon sleeping in a tree at Star K Ranch.  He woke up and crawled head first down the tree!Other animals that might make a good subject for a species account include:

American Robins: they are abundant and spend a fair amount of time on the ground where it’s easy to see what they do. You can watch for the baby fledglings to follow their parents, begging for food by mid summer. Or maybe discover when the Robins start building nests? Do the Robins in your area migrate? If so when? What do you see them eating? There are plenty of things to discover for yourself about this amazingly adaptive backyard bird.

Magpies and Crows: Magpies and Crows make fun study subject because they can be found anywhere and anytime. It’s almost hard to go for a walk and NOT see one of these super smart birds. Also, they are noisy and busy birds. They are always up to something and when they make a fuss, it’s almost always worth going to have a look. Following the racket of our neighborhood crows and magpies has led me to more then one Great Horned Owl, several roosting Red Tailed Hawks, and an injured Cooper Hawk (he was injured by the magpies after he tried to snag one as a snack).

Keeping a Species account record requires some diligence and a little serendipitous luck, but it’s a great way to really learn about a species!  And you never know when you might catch a glimpse of an animal doing something really amazing:  like this video someone captured of a family of a family of

View all posts by lindzs10